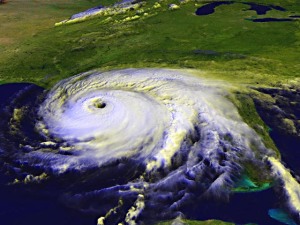 In States of Mind, Brad Herzog described Pastor Max as Forrest Gump with a Bill Clinton twang. The story he told me gave me a different, less colorful, observation. I’d call Pastor Max an unshakable optimist. No matter how many times his life was razed to the ground, he flourished again.

Max was the first person to return to Plaquemines Parish after hurricane Betsy devastated south Louisiana. He left his dorm room at Louisiana State University in Baton Rouge determined to find out what happened to his family’s house. When he reached Belle Chasse, locals informed him the National Guard would stop him at Port Sulphur. Undeterred Max continued south on Highway 23. When he reached the National Guard checkpoint, he flashed his student ID Card, and they let him through.

“They must have thought it looked official or something, because they said, ‘Right on through, sir,'” said Max. “The same thing happened when I reached Empire.” When Max pulled his car into the driveway, a pile of lumber marked the place his house once stood. “It was the first and only time I saw my father cry,” said Max. His family had little before Betsy, and now they had nothing.

Four years later, and four credits from graduation, hurricane Camille destroyed everything his family had managed to scrape together. His father had died a month earlier, so Max quit school to take care of his family. Eighteen months later, he returned to LSU to finish his education, and then abandoned his plans to become an electrical engineer. Max decided he could get rich quick with the thirty-two foot boat his father had purchased to ferry workers to and from oil platforms.

Max set a goal to be a millionaire before he turned thirty and gave his business a name to match his ambitions – Ocean Transportations Systems. As his business flourished, Max added more boats: the Sea Horse, Sea Raven, Sea Rover, Sea Rider and his first 100 foot boat the Sea Serpent.

Max stopped his maddening rush to riches long enough to marry Rhonda in 1972.  Two years later, they were devastated when their first child was born with brain damage. Rhonda accepted an invitation to attend a revival meeting hoping God would miraculously heal their daughter. God didn’t heal their daughter, but he did heal Max and Rhonda’s hearts. “I married a smokin, drinkin, cussin woman who didn’t keep house,” said Max. “Within a month after she committed her life to Christ, she had changed so dramatically, I went to church to find out what happened to my wife.”

Max attended services with his wife for several months before he accepted Christ. “I simply knelt at the altar one Wednesday night,” said Max, “and I said, ‘God I’m sorry.'” After he dedicated his life to Christ, a desire to preach replaced the desire to become the biggest crew boat owner in the gulf.

Max committed his business to Christ and changed the names of his boats to King of Kings, Redeemer, Resurrection, Rapture, and Revelation. Several years later, an opportunity to enter full time ministry arose. He appointed his brother as president of the business and Max and his family moved to central Louisiana to pioneer a church in Dry Prong.

Before Max and Rhonda entered the ministry, they made a commitment to trust God to sustain them and refused to take a salary from his transportation business. One person in Pastor Max’s congregation of eighteen women and two men had a job. He needed a miracle to support his family.

God proved faithful. Shortly after the he assumed the pastorate, the church’s income increased, and the board voted to pay him $300 a month. Rhonda’s parents owned land with some oil wells on it that generated a royalty check of $5 to $10 once a quarter. After they arrived at Dry Prong, her mother called with good news: one of the wells turned into a gusher generating a $400 royalty check per month. Rhonda’s parents gave her the monthly checks.  When they lacked finances for basic needs strangers brought them groceries. When a bill was due they couldn’t pay, someone would give them an unexpected gift equal to their need. Four years later, when they decided to leave their ministry at Dry Prong, Rhonda received a phone call that the well had dried up.

Like Peter who abandoned his calling to return to his fishing business, Max returned to his transportation business. Shortly afterward, the oil industry hit hard times, and his business went bankrupt. He bought a boat and trawled for shrimp but caught nothing. In the past his endeavors prospered. This was the first time he started a business that failed. “It liked to killed me,” said Max. “I gave it up after two years.”

Shortly after Max abandoned his seafood business, the pastor of the church where he had accepted Christ resigned and the congregation invited Max to be their pastor. He purchased a house and settled into his calling that included an unfinished a project the congregation started fifteen years earlier. After experiencing tremendous under the previous pastor, the congregation purchased the land now known as the site of “The Three Crosses.” They planned to build a new church and use the Biblical representation of Golgotha’s three crosses as a “logo.”

The congregation erected a thirty foot cross to represent the cross of Christ and two smaller crosses for the two thieves who were crucified with him. All of the crosses consisted of steel framing. They intended to cover the crosses with wood and illuminate them at night. Their plans came to a halt when FEMA banned all new construction in lower Plaquemines unless it was elevated to a height of fourteen feet.

Forced to abandon their plans for a new church, the steel crosses stood as a testimony to the unfinished project for many years. Over time, the crosses rusted, and the site became an eyesore. When Pastor Max received complaints from the community that the crosses should be maintained, he prayed God would take away the reproach the crosses had become.

Within a month, John, a local business owner, offered to have the crosses sandblasted and painted. John’s zeal to complete the project earned him the job of project director. He added an empty tomb depicting the resurrection of Jesus. Future plans include a model of the Sea of Galilee and a replica of the Garden of Gethsemane.

Every year Christians gather at the crosses to pray for God’s protection on the first day of hurricane season. When asked what he would do if a hurricane hit, Pastor Latham replied, “We’ll know one thing; it won’t be because we haven’t prayed.” He attributes the times hurricanes veered off course at the last minute sparing the vulnerable community to prayer. 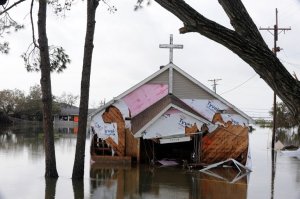 Pastor Max acknowledged that God did not see fit to answer their prayers for protection in 2005. The crosses survived hurricane Katrina, but the church and parsonage lay in ruins. For the third time in his life, he lost everything he owned to a hurricane. The future of the church looked bleak. The church property was not insured. His congregation had been scattered though out the United States. Many had no plans to return.

Max and Rhonda were seeking God’s direction for their lives when they received an abundance of reasons to rebuild the church. First, a church in Jacksonville, Florida offered to pay his salary if they reestablished their church to help the community.  They also flew them to Jacksonville and gave them $10,000 to start rebuilding.

While they were in Jacksonville, another pastor gave them a Honda CRV. The pastor said said, “The Holy Spirit instructed me to donate the vehicle to a family who suffered great loss in the storm. When God tells me to do something, I do it.”  He also received commitments from fifty Hispanic ministers and a mega church in California of financial and manpower support to rebuild his church. Max and Rhonda quickly came to the conviction that God wanted them to reestablish the church and name it Miracle Assembly as a source of hope for a discouraged community.