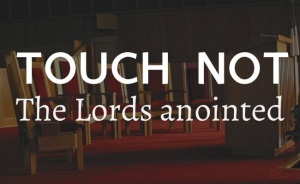 A friend invited me to lunch while I was on my way out of the sanctuary. I worked my way through the buffet line and sat down with my fish, fried okra and salad, expecting pleasant conversation with several families from my church. I had barely finished my salad when the “touch not God’s anointed” discussion arose. My friend’s husband (who I shall call Mr. X to protect their privacy) wanted to know what I thought, so I told him. While I related my thoughts on the matter, I could see my friend vigorously nodding her head in agreement and made a mental note to call her.

My phone call revealed that my friend disagreed with her husband regarding the treatment of pastors. Her husband believes pastors are a little above the rest of us and due greater honor than the average church member. My friend and I believe we should give honor to whom honor is due. While we should respect the office of pastor, we are not obligated to honor a man who abuses his authority.

During lunch, I told Mr. X that we should balance the honor pastors are due with Jesus and the apostles’ actions. Jesus and his apostles did not lead a rebellion against the corrupt priests of their day, but neither did they obey them. Regarding Jesus, the priest complained, “We played the flute for you, and you did not dance; we sang a dirge, and you did not cry'” (Luke 7:32). Jesus refused to be controlled by anyone but God. Instead, he made enemies in high places, publicly calling the priests hypocrites, blind guides, fools and whitewashed tombs. The apostles picked up Jesus’ ways. When the priests commanded them to stop teaching about Jesus and the resurrection, they continued at the peril of their lives. They did not honor corrupt pastors and neither should we.

I popped my last fried okra into my mouth and chewed. Mr. X said, “But, what about David? The Bible says touch not my anointed.” I knew this argument was coming before he said it. More than one well-meaning Christian has misquoted this verse as a warning to us commoners that the pastor is untouchable. True, Saul was a harsh, disobedient ruler that David refused to harm. However, David’s reasoning when he refused to kill Saul because he was “God’s anointed,” and “touch not my anointed” refer to entirely different incidents.

Don’t embrace a partial scripture and conclude you know something. Read it in context.

“When they [the descendants of Abraham] were but few in number, few indeed, and strangers in it, they wandered from nation to nation, from one kingdom to another. He [God] allowed no one to oppress them; for their sake he rebuked kings: “Do not touch my anointed ones; do my prophets no harm.” Psalm 105:12-15, NIV

When Abraham’s descendants wandered from nation to nation and lived in the wilderness for forty years, God rebuked Pharaohs and other foreign kings saying, “Touch not my anointed” (meaning all of his people) “and do my prophets no harm” (meaning the leaders of God’s people). This rebuke was never intended as a warning to God’s people that disobedient pastors are untouchable.

Somehow, God’s rebuke to foreign rulers has been attributed to David’s refusal to kill Saul.  Leaders who try to control God’s people with this doctrine never talk about everything David said. David also said, “As the old saying goes ‘from evildoers come evil deeds’ so my hand will not touch you.” He called Saul exactly what he was, an evildoer, and then called on God to make right the wrongs committed against him by Saul.

David knew exactly what he was doing. Samuel had already anointed David to be the next king of Israel and he had no qualms about killing a man. When but a mere youth, he disabled Goliath with a rock and cut off his head. He also killed two-hundred men and cut off their foreskins to earn his wife. Saul was a little more difficult to deal with than a foreign enemy. Killing your wife’s father is guaranteed to disrupt the harmony at home. God used Saul to bring deliverance to Israel, and many loved him. David knew if he killed Saul, uniting the kingdom under his dynasty would prove extremely difficult, if not impossible, so he wisely left Saul in God’s hands. David said, “May the Lord judge between you and me and may the Lord avenge the wrongs you have done to me.” He refused to act like Saul, so he could call on God to judge Saul without falling under the same condemnation as his wayward king. Two years later, Saul was dead and David was a king with clean hands.

David honored God when he exercised humility and addressed Saul as his equal. He refused to exalt himself above a man who wronged him, because all men are equal in God’s eyes. David was no better than Saul. After taking the moral high ground with Saul, he picked up his sword to slaughter everyone in Nabal’s family for a lessor sin. David also committed adultery with Bathsheba and then killed her husband to hide his sin. In God’s eyes, he was just as big a sinner as Saul.

When a pastor or anyone wrongs us, we are not obligated to continue supporting and honoring that individual with obedience or finances. Instead, we should call them what they are, evildoers, and ask God to judge. But before you call on God to judge, be sure you are not committing the same sins. If you are, you will fall under the same condemnation.

After my friend and her husband left the restaurant, their disagreement continued. Mr. X accused his wife of setting him up. He was positive his wife and I had collaborated to say the same things. Mr. X also told his wife that I was always against pastors. She did not, and I am not. I knew nothing of their disagreement, and I am weary of watching pastors fail. Perhaps, God set Mr. X up. When you hear the same things from two or more sources, God is trying to tell you something.